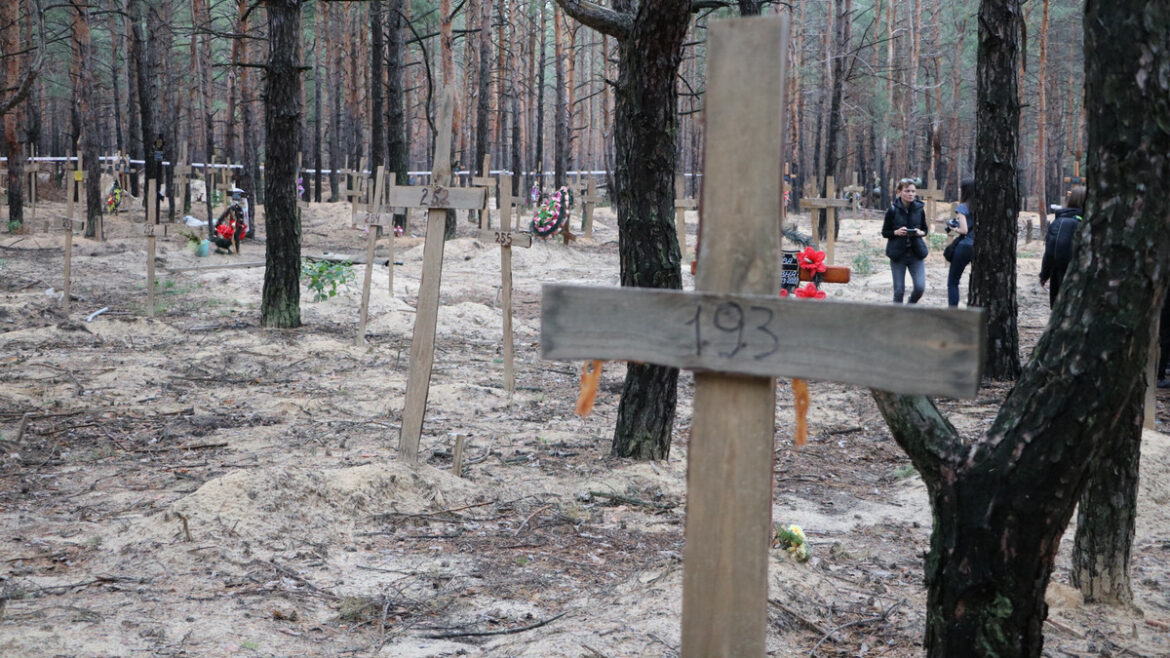 121, 122, 123… Wooden crosses are carelessly knocked together and marked with numbers. The barely visible inscriptions blur into the vast pine forest encircling the city of Izyum.

On the outskirts of this recently liberated city there are smells of raw wood, rain and crime. Behind a white-red ribbon are emergency workers in blue protection suits. They tirelessly dig into the earth to exhume the bodies of the people buried here.

Killed by the occupants, around half a thousand people have been found at this mass burial site. Most of the graves are nameless and some may have been there since March. Civilians including the elderly, women and children are among those buried. Some lie wrapped in blankets, others are simply dressed in regular clothes.

It is September now. The bodies of the victims killed by the occupying Russian forces are being prepared for a dignified burial so that they may finally rest in peace.

The burial site is situated off a dirt track which leads into a forest. Emergency workers have already dug up several dozens of graves. Signs of ordinary life peek through the sand and clay – somebody’s shoe, warm blankets and shreds of civilian clothing.

“I have worked for the prosecutor’s office for a relatively long time and I have never seen anything like this. We saw this on TV when the war crimes in Bucha were being documented” – admitted Olexandr Ilyankov, Head of the Kharkiv District Prosecutor’s Office.

According to the law enforcement’s preliminary count, there are more than five hundred people buried here.

The graves look the same; two pinewood planks knocked together with nails to make a cross, and marked with a number. Somebody was clearly in a hurry to cover up the gravity of their crimes and dispose of the lives and bodies they unlawfully took.

Small wreaths hang on some of the crosses. One of them – purple in colour – is damaged by the heavy rain. Some other crosses bear a surname and initials. While on others, the words “Here lies…”. Day of death – 9th of March. On the 9th of March, the Russians bombarded a high-rise building which then collapsed and subsequently ended the lives of dozens of inhabitants.

Body to body “rests” a mother, father and their baby. Russians gave every victim a number and a wooden cross.

Emergency workers take out the coffins from the grave. Tortured bodies of innocent people, thin fingers raised in the air like a final plea for help. The terror and screams of the victims’ final moments can be felt. Unlucky humans whose lives were ended by the Russians and who finally deserve to rest in peace.

At the end of the dirt track, an old man is seen crying. “My wife has never hurt a fly”, he sobs. His beloved wife was killed by Russian shelling. “I examined her straight away, touched her head, it was intact”, – he described.

“Here lie my neighbors from the third floor. The entire family perished. The Yatsenyuk family. Seven people”, – explains Serhiy. His voice is heavy but calm. Tired. His words are breaking off and his eyes are alive.

Serhiy lived in a high-rise building in Izyum which no longer stands, after being hit by an enemy shell. Dozens of people have died in this house – under the rubble and in the fire. Serhiy and his mother were lucky to escape. His flat was destroyed.

“We were helping one woman down in the basement. For five days, we gave her food and water, and ensured she was warm.. Her name was Raisa, around 50-55 years old. Her hand was trapped. People were telling me: cut off the hand. I asked them: ‘are you insane?’ I may have cut off fingers before, but an entire hand – I’m not a doctor. One morning I went down to see her, but her eyes were already closed”.

Where are they now? In the forest? Not all of them. According to Serhiy’s words, some people have been completely burnt to death. A man with his neighbor helped to identify the bodies that were taken out from the ash.

“SIM-cards were found, inserted, and checked for contacts. This was one way we could try to identify them. Others were identified by their clothes”.

At first, the dead were buried by people themselves. Some in yards, others – somewhere closeby. Inhabitants remember how some of the deceased continued to lie on the streets. And then the occupiers removed the bodies in a car with the inscription “Cargo 200”.

Serhiy explains that there are rumours among the locals that those bodies were buried in the forest.

Investigators say that the burials were carried out under the orders of the occupied administration.

“The person who was burying the bodies explained that those laid to rest were given a number. Later their relatives could confirm their relationship to the deceased and make a plaque” , – says Serhiy Bulavinov, Head of the Kharkiv Region Police Investigative Unit.

Investigators confiscated a register, in which occupiers kept records of burials. In some lines, there is data of the people who died because of Russian aggression. However, many records simply state: “number X – unknown man”.

Cause of death: Ukrainian

A body lies in a white body bag with the silhouette of a person whose face is no longer visible. On the wrist, stretched out to the side, a blue and yellow armband can be seen. An armband in the colours of the Ukrainian flag, worn by its owner in their grave for half a year, their grave dug by the occupiers. Here they are – body and soul laid down for our freedom.

Near the body there are a further ten white body bags. In each – a human life lost.

Across from the mass burial site, the State Emergency Service of Ukraine finds another grave. This grave is without crosses. It is simply a giant hole where Russians have dumped the bodies of killed Ukrainian soldiers. During examination of the bodies, I see socks on the feet of a perished soldier. Information later surfaces in the mass media about the clothes and chevrons belonging to the “Holodonyarivtsi” (93rd Independent Kholodnyi Yar Mechanized Brigade).

At this cemetery, civilians and soldiers lie separately. But the occupiers were not kinder to none of them.

“On some bodies, there are signs of torture. In the first grave, we found a body with a rope tied around the neck. I am sure that on many of the bodies, where signs of torture were not yet established during preliminary examinations, it will be found during detailed forensic medical examinations” , – Prosecutor tells journalists.

He adds that in some graves civilians had tied hands.

Experts working near the mass grave seal a white body bag. It bears the inscription – “Unknown Soldier of the Armed Forces of Ukraine”. I pay attention to a girl standing over a body. She is closing her eyes. It looks like she is praying. I would like to pray with her.

But I do not know any prayer which would ask God for a lesser price than our freedom.

The Ukrainian army has kicked out the occupiers from Izyum. But it is impossible to say that they have left without a trace.

In the forest on the outskirts of the city, 445 graves have been raised up. In each – at least one victim of Russian cruelty. In each, evidence that Russians are carrying out acts of pure evil.

The occupiers have left dug up trenches. A pit covered with pine trees and dug into the ground is not immediately visible. It is not yet open for everyone – who knows what else they have left in our ground.